ITV Interviews Dhalla on The Exiles (The Two Krishnas)

THE ODE Film Premiere at OUTFEST — The Ode’s premiere at Outfest (2008) is showcased on the hit TV show, Showbiz India. Featured are film clips and interviews with the writer/producer – Ghalib Shiraz Dhalla, and cast.

SATRANG VISIONARY AWARD 2013 — Dhalla was awarded the 2013 Visionary Award by Satrang, an LGBTQ support group for South Asians in Southern California. This presentation, preceding the award, highlights some of of his achievements in literature, film and activism. Includes clips from the films, The Ode and Embrace.

Dhalla is interviewed on his novel, Ode to Lata by Bryan Goebel for KCBS and the BBC. Features readings from the novel. 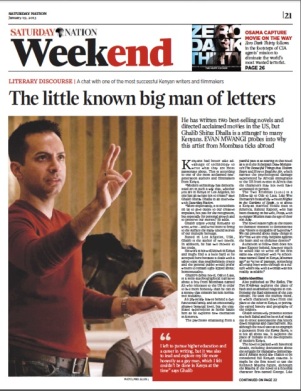 Please click on the link to read full article:

LOS ANGELES MAGAZINE Review of THE EXILES (The Two Krishnas)

VERVE Magazine Review of THE EXILES

INDIA CURRENTS Interview: We Have Enabled This Deception